In the wheat fields of East Africa in 1998, plants began to show terrible signs of distress. Lesions formed on leaves, pustules emerged on stems, grains shriveled and, before long, a majority of entries in the wheat nursery were destroyed. The culprit was a new variant of stem rust to which more than 90% of the world’s wheat would prove susceptible. Stem rust, an ancient and persistent foe since the very beginning of agriculture, had taken a dangerous evolutionary step.

Around that time, in the United States, Ronnie Coffman became director of International Programs at Cornell University’s College of Agriculture and Life Sciences (IP-CALS). A plant breeder by training who had graduated from Cornell and worked with Norman Borlaug at CIMMYT in Mexico in the late 1960s, Coffman had spent much of his career breeding more resilient rice, advocating for the poorest farmers, and finding innovative ways to bring scientists together to solve complex food security challenges. In 2005, as the threat of the new stem rust variant – Ug99 – increased, Coffman would be called on by his mentor and friend Norman Borlaug, who saw infected wheat fields in Kenya, to lead an international team of scientists dedicated to saving the world’s wheat.

"The greatest plague of wheat"

Wheat stem rust, or Puccinia graminis f.sp. tritici, is the most devastating disease that attacks wheat worldwide. The fungal pathogen interferes with a plant’s ability to move water and nutrients from soils through the stem and into leaves and grains. Not only is stem rust highly damaging to wheat, it is also highly contagious. Spores from those infected pustules can spread on the wind rising on jet streams that carry the disease across continents. Farmers with infected fields can lose 90-100% of their crops.

“Stem rust is the greatest plague of wheat,” said Coffman, recently elected professor emeritus of plant breeding and genetics at Cornell. “The Romans had a God of Rust that they worshiped to try to keep it away. Ever since people have been growing wheat, they’ve been worried about stem rust.”

Borlaug changed that dynamic in the 1950s and 60s when he developed wheat varieties that were shorter-stalked, high-yielding and – most critically – resistant to stem rust. His work at CIMMYT, which began the Green Revolution, is credited with saving the lives of over 1 billion people and earned him the 1970 Nobel Peace Prize. 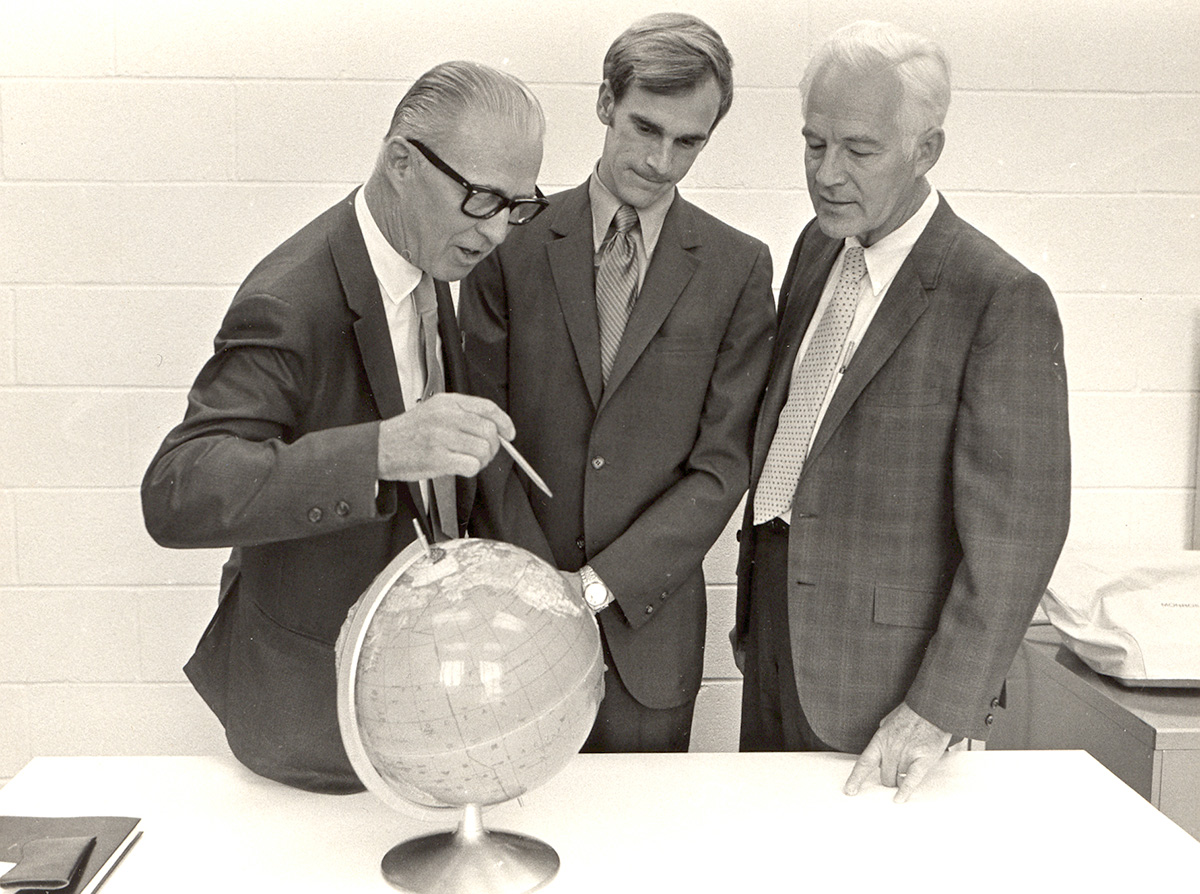 The varieties Borlaug and his successors at CIMMYT had developed and distributed around the world were so effective at preventing stem rust that donor agencies became complacent and investments in wheat research dropped precipitously. By the mid 2000s, CIMMYT was struggling just to remain viable, said Hans-Joachim Braun, former director of the global wheat program at CIMMYT.

And that’s when the crisis hit: William Wagoire, a young, CIMMYT-trained scientist working in wheat fields in Uganda in 1998, found stem rust on wheat breeding nurseries he was growing to select for resistance to yellow rust, which is a more prevalent disease in cool highlands, and where stem rust had been absent for many years. Zacharias Pretorius, a rust researcher from South Africa, confirmed the new race and named it Ug99. This new strain particularly threatened resource-poor farmers in Africa, the Middle East and South Asia.

“We knew this could be a global disaster,” Braun said. “At the time this crisis hit, there were really less than ten highly trained wheat stem rust researchers worldwide – if there is no funding, you cannot attract young students – so our capacity to respond to this was very limited.”

CIMMYT tried to raise the alarm, but it went unheeded for almost seven years, Braun said. Then they appealed to Borlaug, whose prestige guaranteed media, government and donor attention.

“Dr. Borlaug strongly recommended that Ronnie lead this effort, even though most of Ronnie’s previous research had been in rice,” said Ravi Singh, distinguished scientist and head of the Global Wheat Improvement Program at CIMMYT. “Dr. Borlaug knew that Ronnie was so capable and would be the best person to oversee this effort. He was certainly correct.”

After graduating from Cornell in 1971, Coffman joined the International Rice Research Institute (IRRI) in the Philippines. That experience would prove critical in addressing the wheat crisis decades later. At IRRI he established the International Rice Testing Program, through which rice breeders across Asia could collectively trial new varieties in diverse environments, accelerating the selection of top performers. After several years at IRRI, Coffman spent the ensuing decades as a renowned plant breeder and scientific leader at Cornell, where he attracted local and international funding to secure the advancement of agricultural research.

In 2005, in consultation with Singh, Richard Ward and others who played a significant role in conceptualization of the project, Coffman assembled a team of scientists from around the globe. The initial meeting brought together CIMMYT, the Indian Council of Agricultural Research (ICAR), the Food and Agriculture Organization of the United Nations (FAO), the Ethiopian Institute of Agricultural Research (EIAR), the Kenya Agricultural and Livestock Research Organization (KALRO) and donor agencies, totaling more than 78 participants from 18 countries. Conference participants joined together to raise the alarm of the potentially devastating impact of stem rust on world hunger and stability. The Bill & Melinda Gates Foundation responded, initially providing almost $27 million in funding to establish the Borlaug Global Rust Initiative (BGRI) at Cornell to monitor the spread of stem rust, develop new rust-resistant and climate-resilient varieties, and to train young scientists.

“We were sitting on a timebomb; Ug99 was already destroying the wheat crop in Africa,” Singh said. “We needed to breed resistant varieties as quickly as possible so farmers could start to grow them.”

Since 2008, the BGRI has brought together more than 2,500 scientists from 35 international institutions in 23 countries. By forging a global collaborative community, the combined might of those partners averted the catastrophic consequence of a stem rust epidemic that threatened one of humanity’s most important food crops. In total, the Gates Foundation and, later, the UK Foreign, Commonwealth and Development Office, provided more than $100 million in funding to address wheat stem rust through the Durable Rust Resistance in Wheat (DRRW) and Delivering Genetic Gain in Wheat (DGGW) projects through BGRI.

“International wheat science went from just a handful of experts scattered around the globe to a global community of pathologists, policymakers, economists, and breeders, all working together to protect the world’s wheat,” said Sarah Evanega M.S. ‘03, Ph.D. ’09, who was hired by Coffman just out of her Ph.D. program to manage the BGRI.

“The BGRI is a beautiful example of how scientists can work together across borders to solve a major, global problem,” said Evanega, who now leads stakeholder communications for Pairwise and was the founding director of the Alliance for Science.

“BGRI was really critical in organizing scientists, organizing funding, and training a new generation of scientists – from less than 10 scientists working on stem rust when this began, we now have a core of 500 scientists who are trained in rust again,” Braun said. “Ronnie was tremendous at bringing together many people, many institutions, and different strengths to address this very serious global problem. I’m not sure how this would have gone without Ronnie’s leadership.”

Coffman and the BGRI took steps to not only expand the number of scientists working on wheat, but to increase the number of women researchers in the field. With the establishment of the Jeanie Borlaug Laube Women in Triticum (WIT) Early Career Award in 2010, the BGRI accelerated efforts to identity promising women researchers and provide intensive leadership training.

“For generations agricultural research had been dominated by men, with limited access for women to compete for leadership positions and contribute to the scientific effort towards food security for all,” said Maricelis Acevedo, research professor at Cornell and director for science for the BGRI. “Ronnie championed women in a way that few other agricultural leaders had ever done before.”

Acevedo, who earned the inaugural award in 2010 along with Esreaa Alwan, Jemanesh Kifetew Haile, Jessica Rutkoski and Hale Tufan, said the awards have been a major driver to bring gender equity to wheat science. Since 2010, the WIT Awards have recognized 66 women scientists in the early stages of their careers. Many of these women today lead research programs at renowned academic and research institutions.

Godwin Macharia, center director of KALRO and Kenya’s principal wheat breeder, said Coffman is particularly supportive of young scientists and prioritizes their training. Macharia started as a technician at KALRO before completing master’s and doctoral programs and later becoming center director. He recalled that as a graduate student, he was chosen to attend the 2012 BGRI Technical Workshop in Beijing, where he was able to share his research, learn from others and make important connections with fellow scientists.

“Ronnie Coffman, through the BGRI, really helped many of us to be where we are today as scientists and leaders in plant breeding,” Macharia said. “Ronnie Coffman is fatherly, like a father in science. Every time he has come to Kenya to visit, he creates time to talk with our junior scientists, to discuss their research and their aspirations. He has been a mentor and inspirational for those of us coming behind him.”

Coffman’s positivity, humility and encouraging attitude are his “special abilities” that enable him to bring people together, Singh said.

“We at CIMMYT felt that he was part of our program, even though he was at Cornell – I think most people feel that way, and I think that’s why they commit to the projects he leads,” Singh said. “That’s the beauty of this international cooperation and collaboration: We all have the same goal and same cause, so we work together and make it happen. Hundreds of wheat varieties, grown on millions of hectares have come out of this program, and Ronnie’s leadership has been critical to that.”