A Life of Resilience and Growth
Menu

It started with a

Known as the father of the Green Revolution, Norman Borlaug was born March 25, 1914 on a farm near Cresco, Iowa. After completing his early education in his hometown, he went on to study forestry and plant pathology at the University of Minnesota, where he earned his bachelor’s and master’s degrees and completed his doctorate in 1942. After two years as a microbiologist with the DuPont de Nemours Foundation, he took on the challenge of leading the wheat improvement efforts of the Cooperative Mexican Agricultural Program, sponsored by the Mexican government and the Rockefeller Foundation.

In Mexico, Norman Borlaug’s scientific knowledge found expression in a humanitarian mission: developing improved grain varieties to feed the hungry people of the world. A practical, energetic, hands-on researcher, Borlaug worked in the fields alongside farm workers, students, and interns, sharing his knowledge as well as the labor of producing food crops. During his 20 years in Mexico,  Borlaug and his colleagues perfected a semi-dwarf, high-yielding wheat variety that was resistant to disease and resisted lodging (the bending and breaking of the stalk that often occurs in high-yielding grains). 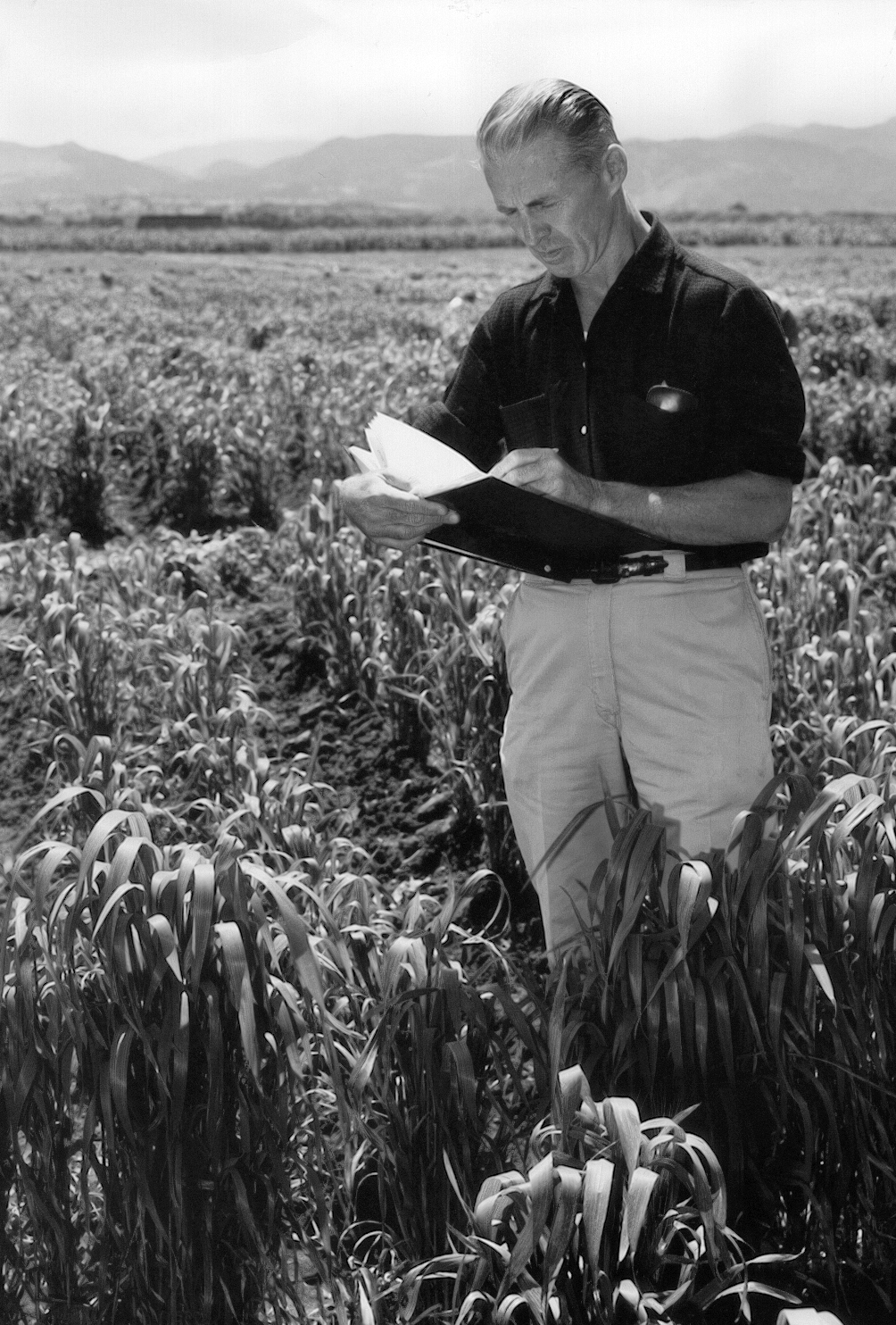 as we know it today.

In 1964, Norman Borlaug was appointed director of the Wheat Research and Production Program at the then newly established International Maize and Wheat Improvement Center (CIMMYT) near Mexico City. This position allowed him to expand his teaching mission. He shared his immense knowledge of research and production methods with thousands of young scientists from all over the world, “seeding” agricultural production in their home countries with new ideas and new productivity.

For his work in South Asia, and for his earlier work in Mexico, Borlaug received the Nobel Peace Prize in 1970. Over the years, he received honorary degrees and recognition from universities, governments, and organizations worldwide. Through it all, he remained a deeply humble and practical man who was as productive after winning the Peace Prize as he was before. His longstanding commitment was to the farmers of the world, and that no child should go to bed hungry.

the alarm for a new threat

The emergence in Uganda in 1998 of a devastating new strain of wheat stem rust imperiled food security in East Africa and around the world. Now known as Ug99, the pathogen threatened more than 80% of the world’s wheat believed to be susceptible. Borlaug knew that such a virulent strain put smallholder wheat farmers in Africa at immediate risk. More alarming, without a coordinated international response, Ug99 could spread globally and wipe out much of the world’s breadbasket in Asia, Australia and even the U.S. and Canada. Along with Ronnie Coffman of Cornell University, Borlaug rallied world leaders in the early 2000s to address the decades of complacency that had resulted in too few wheat scientists working in inadequate breeding and testing facilities, and scarce resources to train the next generation of hunger fighters needed to address this and other threats to wheat. 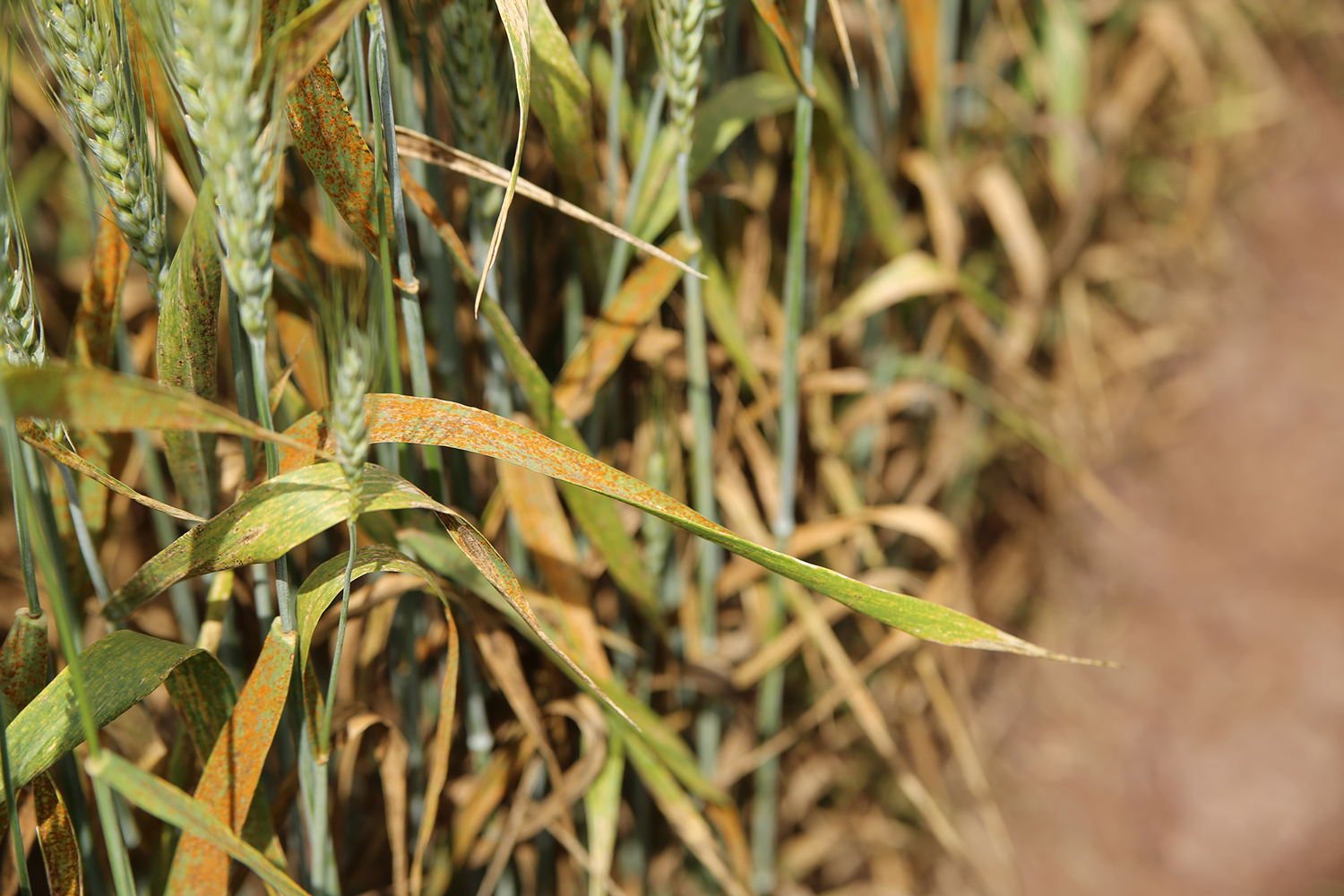 Under Borlaug and Coffman’s leadership, a 2005 report, written with Cornell University, CIMMYT, ICARDA, UN-FAO and Kenyan and Ethiopian scientists, sounded the alarm about the Ug99 outbreak and its implications for global hunger. That year, the partners launched the Borlaug Global Rust Initiative (BGRI) to galvanize support and meet the threats to wheat head-on. In 2008, the Bill & Melinda Gates Foundation funded the ambitious Durable Rust Resistance in Wheat (DRRW) project through Cornell’s International Programs in the College of Agriculture and Life Sciences. The DRRW aimed to develop rust-resistant varieties of wheat and deploy them to thwart Ug99 and other rust diseases. Further funding support came from the United Kingdom through what is now known as UK Foreign, Commonwealth and Development office. Consolidating scientific and donor support for developing more disease-resistant and climate-resilient wheat through the BGRI, and launching the DRRW in CIMMYT’s wheat fields in Ciudad Obrégon, Mexico in 2008, was Dr. Borlaug’s final call to action— he died September 12, 2009 in Dallas Texas at the age of 95. Borlaug’s work lived on through the BGRI and impacts global wheat communities to this day.

From 2016 to 2020, the Delivering Genetic Gain in Wheat project, or DGGW, worked to modernize breeding programs at CIMMYT and national programs in India, Ethiopia, Kenya, Nepal and Bangladesh to increase the rate of genetic gain for wheat, and systematically reduce the world’s vulnerability to wheat disease and climate change. The DGGW built on the DRRW, an international collaboration of scientists and farmers that was inspired by Norman Borlaug. Both projects were managed and led by the Borlaug Global Rust Initiative, and funded by the Bill & Melinda Gates Foundation, and UK aid from the British people.

From 2008 to 2016, the overarching objective of the Durable Rust Resistance in Wheat project, or DRRW, was to systematically reduce the world’s vulnerability to stem, yellow and leaf rust of wheat; to evolve a sustainable international system to contain the threat of wheat rusts; and to continue enhancements to productivity to withstand future global threats to wheat. A precursor to the DGGW, it included 22 research institutions around the world and was led by the Borlaug Global Rust Initiative (BGRI) in International Programs of the College of Agriculture & Life Sciences at Cornell University.