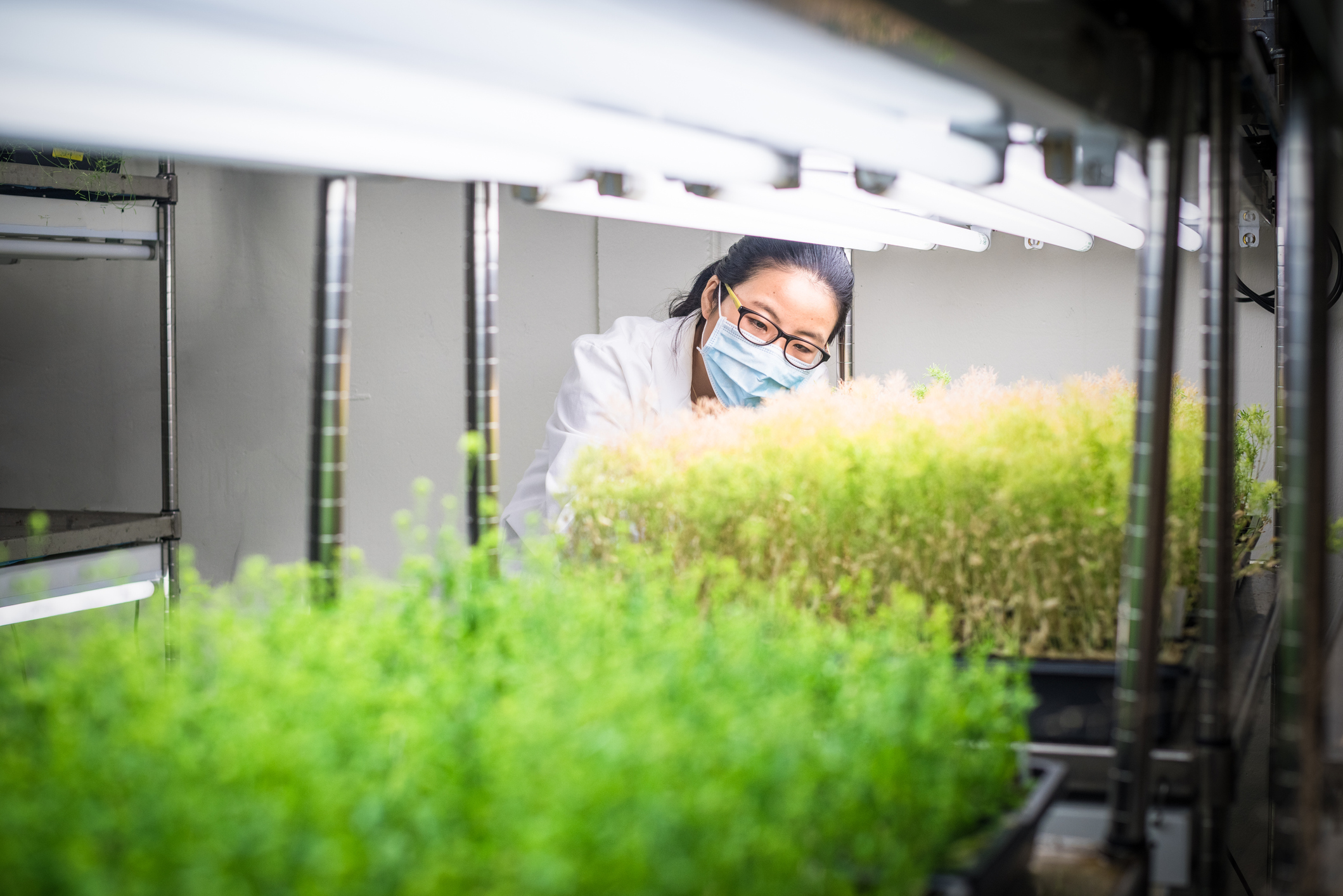 Genomic breeding technologies offer exciting opportunities for wheat improvement amidst escalating challenges like changing climates, unpredictable temperatures, reduced precipitation and biotic stresses. Recognizing the need for accelerating the rate of genetic gain in wheat, the Delivering Genetic Gain in Wheat and the USAID Feed the Future projects have contributed extensively to the phenotyping and genotyping of an impressive number of 74,403 CIMMYT wheat breeding lines, generating more than a million phenotyping datapoints and 3 billion marker datapoints. These big datasets have been leveraged for evaluating state-of-the-art genomic technologies like genomic selection, genome-wide association mapping, and genomic fingerprinting that have empowered the CIMMYT wheat breeding program to efficiently deliver high-yielding, climate resilient and disease resistant varieties.

Genomic selection, a genomics-based selection strategy where genomic-estimated breeding values obtained from genome-wide molecular markers are used for the selection of individuals has gained burgeoning interest in recent years and is advocated as an approach that can dramatically accelerate genetic gains and change the role of phenotyping in breeding. Since it can be beneficial for CIMMYT and other wheat breeding programs, particularly in developing countries that are constrained in their ability to evaluate a large number of breeding lines due to limited resources, we have done a comprehensive evaluation of genomic selection for 35 key traits in wheat evaluated by CIMMYT and national partners.

Our results have provided strong evidence that genomic selection will be a very powerful tool for end-use quality related traits like alveograph, mixing time, grain protein, flour yield, flour sedimentation, loaf volume etc. and some diseases, that were well predicted using historic training populations. Hence, genomic estimated breeding values for these traits have been routinely integrated into selection decisions and selections have been scaled up to un-phenotyped early-generations using predicted values. This has led to a paradigm shift in integrating genomic breeding tools into CIMMYT’s wheat breeding pipeline and has resulted in better selection efficiency and high phenotyping cost-savings to the program.

We also performed a large genome-wide association study that led to a significant breakthrough in understanding the genetic-architecture of key traits like phenology, plant height, lodging, resistance to rusts and other foliar diseases, grain color, kernel weight, dough strength, bread-making quality, protein content and grain yield in wheat. We have identified hundreds of significant marker-trait associations and delineated 142 unique linkage-based QTLs, among which 55.6% were novel. One of the extremely intriguing and novel co-locations identified in our study was the association of the 2NS translocation from Aegilops ventricosa with grain yield in 10 different environments, stem rust seedling resistance to many races, stripe rust in Mexico, wheat blast, and lodging, demonstrating its remarkable value for wheat breeding. We also anchored about 542 significant trait-associated markers and 118 previously reported genes in proximity to the significant markers onto a powerful reference phenotype-genotype map aligned to the refence genome of bread wheat, which is a valuable resource providing new opportunities for accelerating genomics-assisted wheat breeding through a targeted selection of desired regions.

We have fingerprinted 44,624 wheat lines for 195 traits-associated markers, generating over 7.6 million data-points, which is a phenomenal resource to the global wheat community for enhancing productivity and stress-resilience in wheat. The fingerprinted panel comprises several key varieties cultivated worldwide, parents from CIMMYT’s crossing blocks 2009-2018 and is a quantum leap in understanding the genetic basis of traits in superior varieties. For example, a benchmark high-yielding CIMMYT-derived Mexican variety, BORLAUG100 F2014 was found to be rich in grain yield favorable alleles and a key stem rust QTL against the Ug99 lineage was traced back to old Kenyan (Kenya Fahari, Kenya Swara) and Ethiopian (FH6-1-7) varieties.

Furthermore, we also examined the marker allele frequency dynamics for key traits over 15 years to characterize the role of selection at CIMMYT in shaping patterns of allelic variation over time. While there was a spectacular increase in favorable allele frequencies for many traits over years due to selection, the results also emphasized the need for a continued effort to introduce novel sources of favorable alleles and the importance of integrating genomic tools in achieving accelerated enrichment of favorable alleles. Overall, our research has facilitated extending the frontiers of genomics-assisted breeding in wheat and will be very beneficial for future diagnostic marker development, gene discovery, marker-assisted selection and genomic selection in wheat.