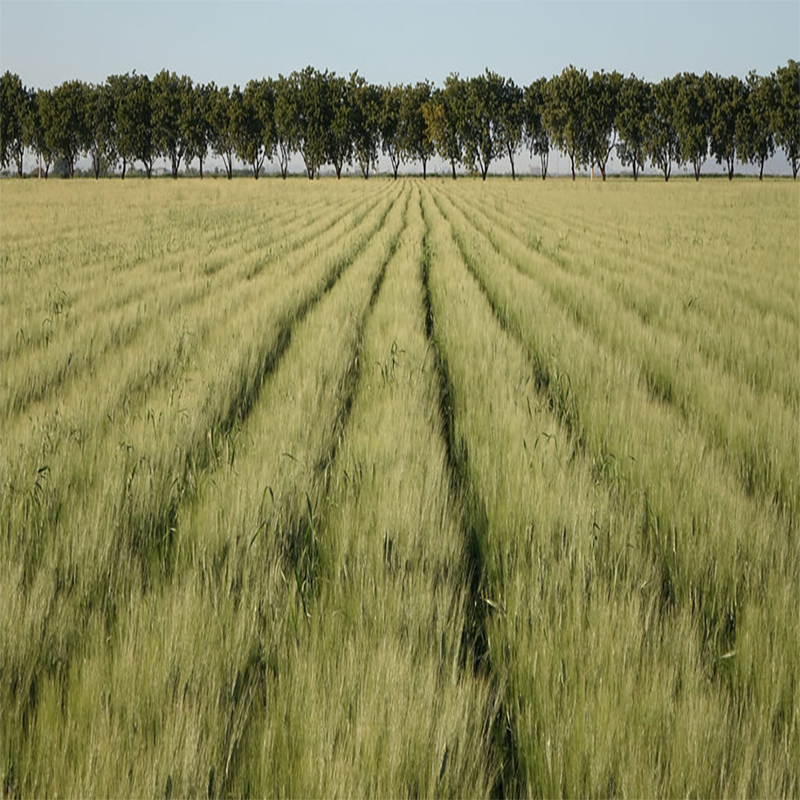 The history of co-evolution of wheat resistance genes versus mutating rust pathogen populations shows a regular pattern of occurrence. It is not uncommon that after the arduous task of introgressing or cloning a new effective R gene, that gene is later reported to be no longer effective due to the appearance of new virulent pathotypes. Occasionally, the characterized gene has been reported as being ineffective even before its use in breeding or isolation. Regardless of how broad a gene’s resistance spectra, how long it has been effective, and where it originated, there seems to be no guarantee of long-term protection of wheat crops by any single R gene against constant evolving Puccinia races, the casual agents for wheat rust diseases. Exploring appropriate deployment of multiple R genes, also referred to as “gene stewardship” of R genes, has been advocated as useful strategies towards increasing the longevity of genetic resistance.

Wild species of wheat are proven sources of resistance that can be transferred to commercial cultivars. The stem rust resistance gene known as Sr26 is derived from tall wheat grass. Its introgression into common wheat as a wild wheat chromosome segment (wheat-6Ae#1) is one of the most successful examples of utilization of resistance resources from wheat wild relatives. Sr26 was transferred to wheat by Dr. Doug Knott of the University of Saskatchewan using irradiation[1]Knott, D. R. The inheritance of rust resistance. VI. The transfer of stem rust resistance from Agropyron elongatum to common wheat. Canadian Journal of Plant Science 41,109-123 (1961)., and the resistance has remained effective against all known P. graminis tritici (Pgt) pathotypes, including all races from the Ug99 group (RustTracker.org). The Sr26 carrying  wild wheat segment has since been released in several Australian wheat cultivars. McIntosh and colleagues  made special mention of the fact that Sr26 was an excellent example of a durable stem rust resistance[2]McIntosh, R. A., Wellings, C. R. & Park, R. F. Wheat Rusts: An Atlas of Resistance Genes (CSIRO, 1995)..  A second Th. ponticum-derived Sr gene, Sr61 (previously designated SrB), was identiﬁed in the South African wheat accession W3757, which carries a wild wheat chromosome substitution (6Ae#3 replacing 6D)[3]Singh, R. P., and McIntosh, R. A. Genetics and cytogenetics of resistance to Puccinia graminis tritici in three South African wheats. Genome 29, 664-670 (1987). . Since the 1980’s, Australian scientists working at the University of Sydney, CSIRO and University of Adelaide, and including others from the University of the Free State (South Africa), Aarhus University (Denmark), and John Innes Centre (UK), have contributed significantly with diverse skills in pathology, molecular genetics, cytogenetics and computational biology  towards the characterization of these two genes. Our work was only possible because of the long-term financial support from the Grains Research and Development Corporation (GRDC), Australia.

Cloning of two genes 40 years after their initial characterization

No virulence has yet been reported to either Sr26 or Sr61 and hence their significance with the international collaborative effort to isolate the genes. Because genetic dissection of genes within alien segments in wheat was not possible due to lack of normal chromosomal interchange between wheat and tall wheat grass, the question arose as to whether the apparent durability of such resistance might be due to the presence of multiple genes rather than a single gene. With both genes derived from tall  wheat grass, and on similar chromosomes there was also speculation that they could be the same or related variants of a common gene. After about 40 years following their characterization, we cloned both genes and determined their relationship. We showed that Sr26 and Sr61 encode unrelated immune receptors (NLR genes). With the cloning effort underscoring the knowledge of two distinct genes, it has provided added significance to the effort made  by Dr Ian Dundas and colleagues in combining both genes  in a single Th. ponticum segment representing a natural gene stack in wheat. Ultimately it simpliﬁes co-deployment of these two genes and potentially enhances their resistance durability[4]Zhang, J., Hewitt, T. C., Boshoff, W. H. P., Dundas, I., Upadhyaya, N., Li, J., Patpour, M., Chandramohan, S., Pretorius, Z. A., Hovmøller, M., Schnippenkoetter, W., Park, R. F., Mago, R., … Continue reading.

Combining multiple R genes is a widely accepted gene stewardship strategy to enhance the durability of resistance on the basis that the simultaneous defeat of two or more effective R genes is less likely than defeat of either gene alone. One compelling reason for cloning R genes is the opportunity to combine them into transgene cassettes to allow multiple R genes to be selected as a single “trait” in breeding. The most desirable Sr genes to be combined into a transgene cassette are those with broad spectrum effectiveness against diverse Pgt races. Virulence to most of the cloned Sr genes has been documented making isolation of Sr26 and Sr61 a valuable addition for inclusion into future transgenic cassettes. 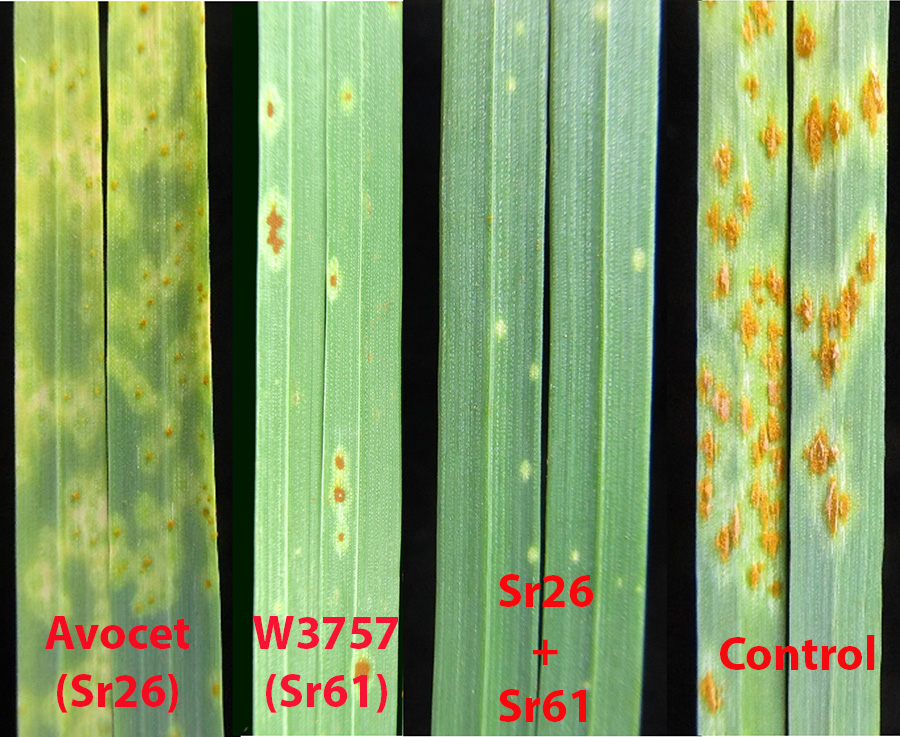 Figure 1. Disease responses on wheat seedling leaves showing the effect of two genes, the Sr26 + Sr61 recombinant is more resistant than lines with either gene alone.

However, transgene cassette deployment in wheat is currently constrained by GM regulations. As a result of the cloning work and the development of diagnostic probes from the constituent genes wee conﬁrmed the presence of both Sr26 and Sr61 in a recombined tall wheat grass chromosome segment introduced into wheat. This piece of wild wheat segment does not recombine with wheat chromosomes making it a Sr26–Sr61 gene stack. The resistance responses conferred by Sr26 and Sr61 were confirmed against multiple Pgt isolates, including races PTKST (collected in South Africa), TTKTT (collected in Kenya), and TTRTF (collected in Italy and Eritrea). In all assays, the recombinant plants containing both Sr26 and Sr61 were more resistant than lines with only one gene[5]Zhang, J., Hewitt, T. C., Boshoff, W. H. P., Dundas, I., Upadhyaya, N., Li, J., Patpour, M., Chandramohan, S., Pretorius, Z. A., Hovmøller, M., Schnippenkoetter, W., Park, R. F., Mago, R., … Continue reading. This result showed that it is an ideal germplasm with potentially more effective, more durable and more broad-spectrum resistance against the wheat stem rust pathogen for ongoing resistance breeding. Undoubtedly the germplasm will continue to be monitored by pathologists, molecular geneticists and breeders and the eventual release of cultivars with the gene pair will benefit grain growers in more sustainable wheat production.

A recombined Sr26 and Sr61 disease resistance gene stack in wheat encodes unrelated NLR genes has been selected as an Editor's Choice at Nature.com