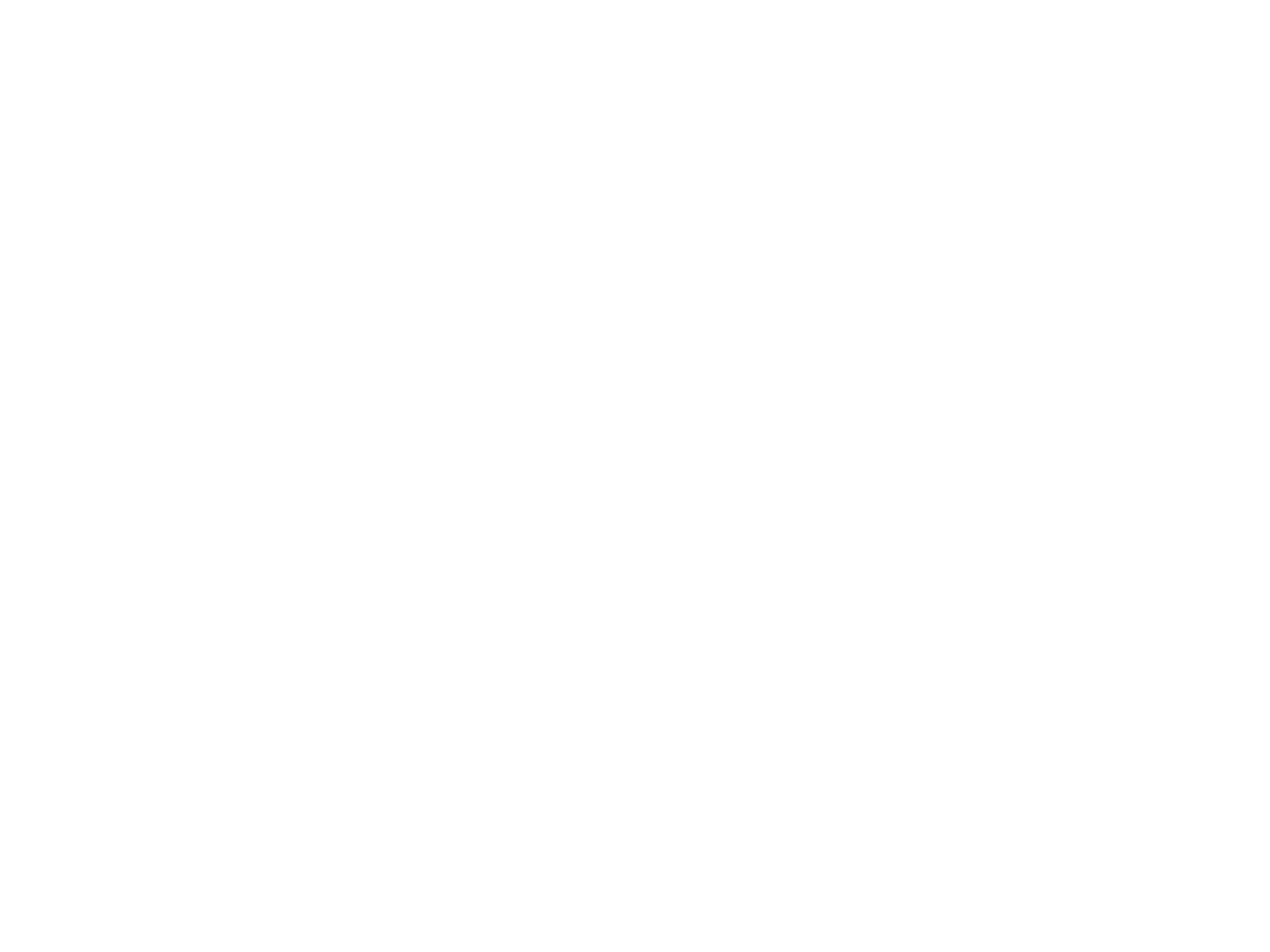 The WIT awards recognize talent and dedication from both early career women scientists and those who have excelled at mentoring women working in wheat and its nearest cereal relatives. This year’s winners are innovative wheat researchers from China, Ethiopia, India, Indonesia, Italy, Morocco, and Pakistan.

“Serving as Chair of the Borlaug Global Rust Initiative has allowed me to cultivate and encourage the next generation of wheat researchers, and nothing embodies that more than the Women in Triticum awards,” said Jeanie Borlaug Laube, daughter of Nobel Prize-winner Norman E. Borlaug. “These seven women are strong advocates for achieving my father’s goal of global food security.”

The WIT Early Career Award provides early career women working in wheat with the opportunity for additional training, mentorship, and leadership opportunities. The WIT Mentor Award recognizes the efforts of men and women who have played a significant role in shaping the careers of women working in wheat and demonstrated a commitment to increasing gender parity in agriculture.

“This cohort of WIT award winners is from a broad geographic range, which speaks both to the worldwide importance of wheat and the global reach of the BGRI,” said Maricelis Acevedo, director for science for the BGRI and research professor in the Department of Global Development at Cornell University. “The threats to wheat — such as climate change, biotic stresses, and human conflict — are global and require a global response. Answering these challenges will require collaboration of a global community of scientists and the 2022 WIT awardees cohort takes their place among our previous winners.”

Since founding the WIT awards in 2010, the BGRI has recognized 66 early career award winners and 12 mentors from 27 different countries.

from Morocco, is a postdoctoral research fellow at Leibniz Institute of Plant Genetics and Crop Plant Research (IPK) in Germany. She focuses on the development and implementation of genome-wide predictions and association mapping for plant genetic resources, defining trait-customized core collections to maximize the diversity present within IPK genebank accessions, and researching rare alleles by applying genomic tools. She received her Ph.D. from Mohammed V University in Morocco, with research activities funded by the International Center for Agricultural Research in the Dry Areas (ICARDA). Her advisors were Wuletaw Tadesse and Souad Cherkaoui. El Hanafi earned her B.Sc. and M.Sc.degrees in biology and management and conservation of biodiversity and biotechnology from Sidi Mohamed Ben Abdellah University in Morocco. 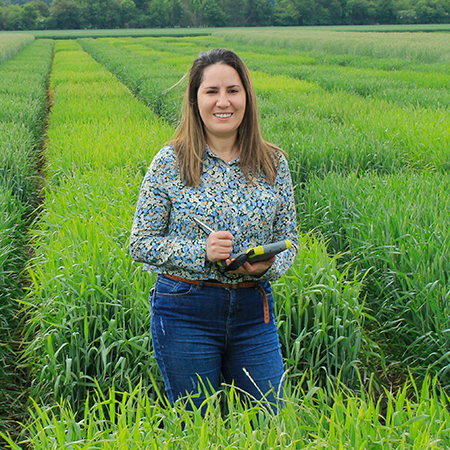 from Indonesia, is an academic staff member at Gadjah Mada University in Indonesia and is pursuing a Ph.D. at the University of Natural Resources and Life Sciences, BOKU Vienna-Austria. She received a B.Sc. in agronomy from Sebelas Maret University, Indonesia, and an M.Sc. in plant breeding from Gadjah Mada University. Her current research focuses on the characterization of fusarium head blight resistance in durum wheat. She collaborates with the John Innes Center to evaluate potential fusarium head blight resistance in wild wheat relatives. 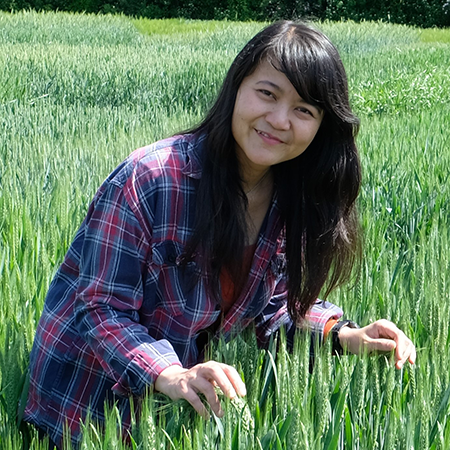 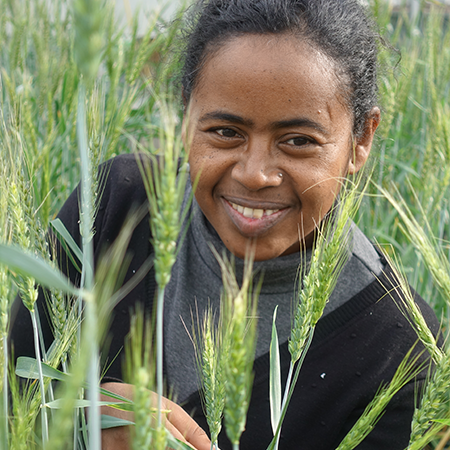 from Italy, is a Ph.D. candidate in the Lee Hickey Lab at the Queensland Alliance for Agriculture and Food Innovation. She completed her B.Sc. and M.Sc. degrees at the University of Padova. She studies the root system of wheat to aid in the development of elite wheat varieties by integrating a range of tools, including a novel single plant selection method for root traits, marker-assisted selection for key root genes, and rapid backcrossing using speed breeding. 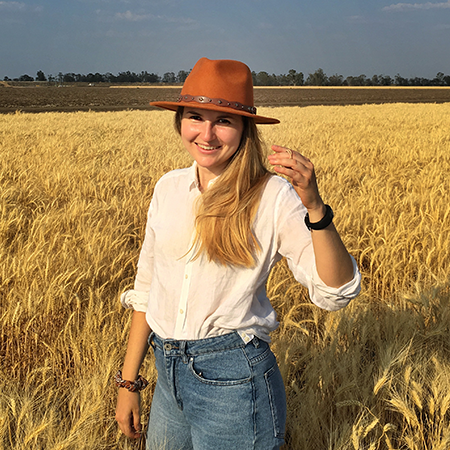 from Pakistan, is an assistant professor at the University of Agriculture at Faisalabad where she earned her B.Sc. and M.Sc. degrees in plant breeding and genetics. She received her Ph.D. in agronomy from Kansas State University. Under the supervision of Guihua Bai, Rana’s research identified genes resistant to fusarium head blight in U.S. winter wheat. She also developed and characterized wheat germplasm for durable rust resistance and reduced fungicide use. 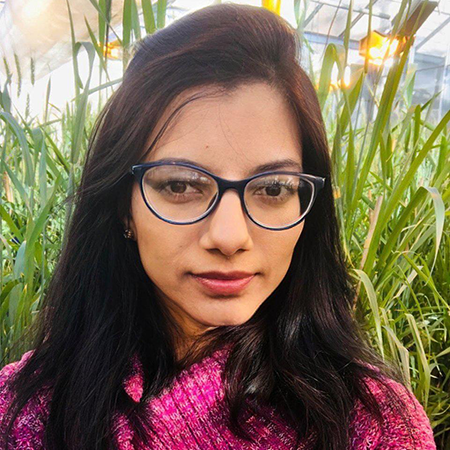 from China, is a postdoctoral research fellow with Peter Dodds at the Commonwealth Scientific and Industrial Research Organization (CSIRO). Her Ph.D. degree resulted from a joint program between the CSIRO rust group and the Plant Breeding Institute (PBI) of The University of Sydney. As a recipient of the Monsanto (now Bayer)’s Beachell-Borlaug International Scholars Program Award, her research interests focus on the wheat rust disease pathogen, including host resistance characterization and isolation, host immune receptor function, disease resistance breeding and molecular assist breeding, germplasm resistance screening, and pathogenicity evolutionary pathways. 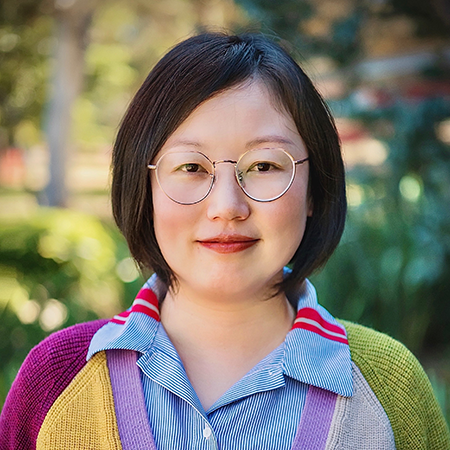 from India, is director and principal molecular geneticist at the School of Agricultural Biotechnology at Punjab Agricultural University. In 2018 she and team members from the Indian Council of Agricultural Research (ICAR) earned the BGRI Gene Stewardship Award. She is a fellow of two national science academies of India. Her research focuses on identification and introgression of novel genetic variation from wild wheat species into cultivated wheat leading to wheat gene pool enrichment. Along with her team, she has successfully introgressed a series of genes for disease resistance, quality, and productivity traits from wild Aegilops and Triticum species to elite wheat backgrounds. Chhuneja has mentored more than 30 young women researchers, including WIT Early Career awardees Mitaly Bansal (2016) and Sanu Arora (2019). 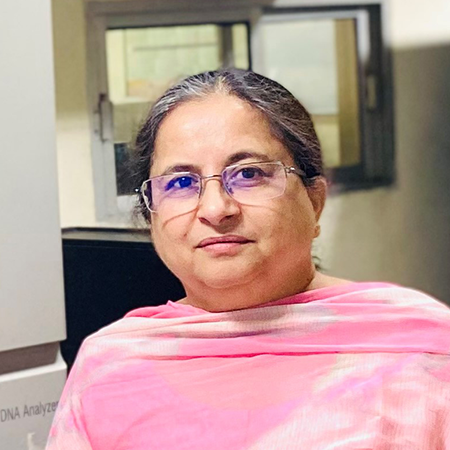 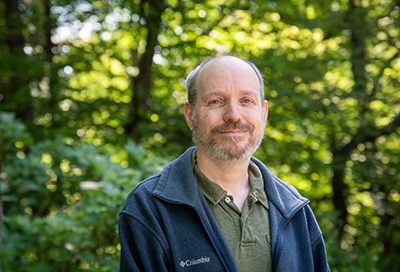 John Bakum is a communications specialist with the BGRI