Valentyna Klymiuk, from Ukraine, began her scientific career as a PhD candidate in Hydrobiology in Donetsk National University, but the war in the Donbass region of the Ukraine resulted in temporary closing of her university in 2014. Escaping the war had an extensive impact on her career, forcing her to enroll for new PhD studies at the University of Haifa (Israel) in the plant genomics lab of Tzion Fahima, the director of the Institute of Evolution. She later completed her studies in hydrobiology and obtained a PhD diploma from the Institute of Hydrobiology of National Academy of Sciences of Ukraine, in parallel to her studies at the University of Haifa. Her second PhD, in Plant Genomics and Host-Parasite Interactions, focused on the cloning of the stripe rust resistance gene Yr15 from wild emmer wheat, which encodes for the Wheat Tandem Kinase 1 (WTK1) protein. She developed high throughput KASP Yr15 functional molecular markers (FMMs) that facilitate efficient incorporation of Yr15 into modern wheat cultivars in wheat breeding programs. After cloning Yr15, she and other researchers in Fahima’s lab discovered a novel plant protein family designated as “Tandem Kinase-Pseudokinases (TKPs)” that are involved in plant immunity. She believes her discovery will open new venues of research exploring the fundamental concept of diversity of plant defense mechanisms. In light of the progress achieved in genetic engineering and gene editing of plants, her vision is to develop novel approaches for engineering new crop varieties with a wide spectrum of disease resistance contributing to the safety of global food production. 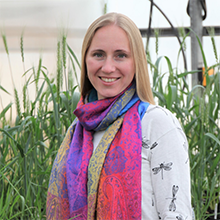