Mehnaz, Women in Triticum Early Career Award winner from Pakistan, is an early career scientist who is very keen to pursue her career in Triticum research and is passionate to contribute to international agriculture research and development. Mehnaz completed BSc (Honours) and MPhil in Plant Breeding and Molecular Sciences form Agricultural University Peshawar, Pakistan. After completing her studies, she was appointed as a Research Scientist at Agricultural Research Station under Government of KPK (Pakistan) Agriculture Livestock and Cooperative Department in 2009. During her tenure she was involved in breeding of cereal crops including wheat, barley, maize and rice. As a part of her research, Mehnaz was strongly involved in wheat and barley germplasm enhancement with a strong focus on resistance breeding applying various traditional and molecular approaches. She screened different germplasm and advanced lines of cereal crop for high yield and disease resistance with a special focus on rust resistance in wheat and barley. Mehnaz has been successful in selection of wheat breeding lines conferring resistance to leaf rust. Furthermore, she has also conducted micro plot trials (MPT) of various wheat and maize varieties in agro climatic condition of ARS Baffa, Mansehra.

Mehnaz served in Pakistan for eight years before starting PhD in Australia in 2017. Mehnaz started her PhD in 2017 at the University of Sydney. To conduct her PhD studies, she was awarded a highly competitive PhD international postgraduate research scholarship. She worked on an important and topical research project for discovery and characterization novel resistance genes to leaf rust in barley.

Mehnaz discovered, characterized and fine mapped a novel gene conferring resistance to barley leaf rust; which was officially designated as Rph28 and the finding were published in an international peer reviewed journal. She has also fine mapped and developed a closely linked marker for gene Rph14. 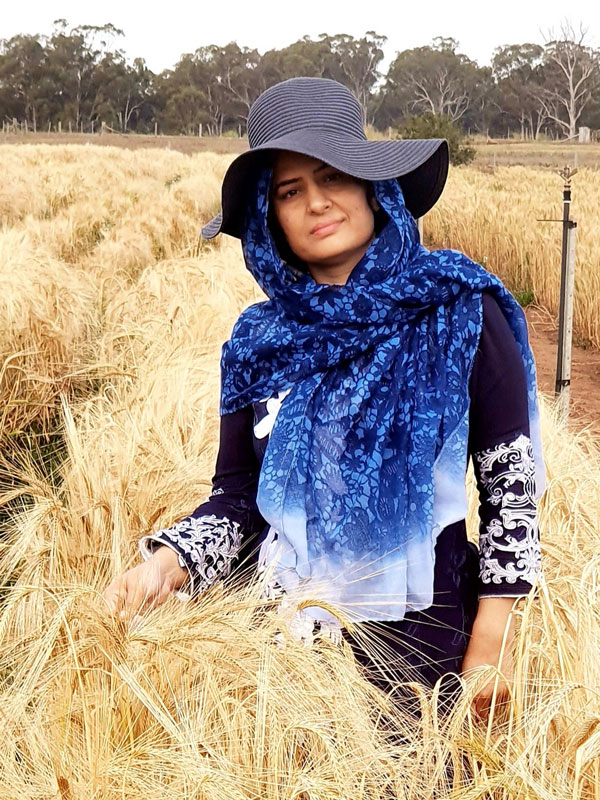 Wheat production is at high risk from devastating rusts diseases. Although the scientists are making enormous efforts by discovering and pyramiding resistance genes but evolution of new strains of pathogens is making most of these genes ineffective. Therefore, it is critical to speed up search for new resistant genes through advance plant breeding comprised of latest molecular technology and digital agriculture.