Fikrte Yirga Belayineh, from Ethiopia, received her BS in Agriculture Plant Science in July 2013, graduating with distinction. Immediately after graduation, Fikrte was employed as a junior researcher in plant pathology by the Ethiopian Institute of Agricultural Research (EIAR), based at Kulumsa Agricultural Research Center (KARC). Since then, she has been engaged in various wheat pathology research activities until joining the Postgraduate Programs Directorate at Haramaya University in October 2016 to pursue her MSc study in Plant Pathology in the School of Plant Sciences. Fikrte’s MSc thesis work, under the supervision of Dr. Ayele Badebo and supported by the EIAR and DGGW, focused on characterization of Puccinia striiformis f. sp tritici and evaluation of wheat genotypes for their resistance to stripe rust. After earning her masters, Fikrte continued her research work on wheat diseases joining the Wheat Regional Center of Excellence at Kulumsa Agricultural Research Center in Ethiopia. Born and raised in a farming family in rural Ethiopia, Fikrte developed an early curiosity and passion for field crops such as wheat on her father’s field, and saw how her family and many other farming families struggled. Around 85% of Ethiopia’s workers are in agriculture, and Fikrte’s dream is to move them from traditional farming into modern and commercial agriculture and agribusiness. Through teaching and research, she hopes to empower resource-poor farming communities, particularly female farmers in her country and other developing nations, to improve livelihoods, reduce poverty, and enhance food security. 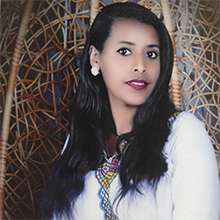