Carolina Rivera was born in Ciudad Obregon, Mexico. She received her BSc in Biotechnology from Instituto Tecnologico de Sonora (ITSON) and began her professional career at the CIMMYT Obregon station as an undergraduate intern and research assistant, where she was exposed to CIMMYT’s global research, history and achievements in ensuring global food security. After working in CIMMYT, she enrolled in a PhD program at the University of Nottingham through the MasAgro initiative. The main outcomes of her PhD research were the identification of novel anatomical stem traits associated with increases in spike partitioning and growth for enhancing grain number, traits associated with the trade-off between increased biomass and harvest index, and the relative contributions of leaf-lamina and leaf-sheath photosynthesis to final grain yield. After her PhD, she returned to Mexico and joined CIMMYT Wheat Physiology. As the IWYP Data Coordinator at CIMMYT, she helped release a new instance of an institutional database called ‘Germinate’ which hosts phenotypic, genotypic and other data on wheat collected by CIMMYT, IWYP project members, and partners around the world. She seeks to deploy new technologies to collect field data and develop better systems to standardize, compile and curate field data collected by members of CIMMYT research teams. Carolina also collaborates on different research projects related to improvements in harvest index, source sink balance and potential grain weight in wheat. Passionate about training, Carolina involves herself in capacity building activities offered to CIMMYT and external technicians, students and visitors. 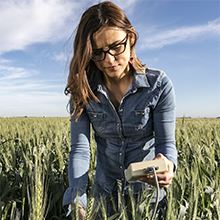