“We rest on the shoulders of a lot of mighty people who have come before us,” said Ronnie Coffman, vice chair of the Borlaug Global Rust Initiative (BGRI), speaking to a global audience of wheat scientists and farmers, as he awarded four individuals with the Norman E. Borlaug Lifetime Achievement Award at the 2020 BGRI Technical Workshop on Oct. 9. “Each of these individuals has contributed to the improvement of wheat and smallholder livelihoods in major and enduring ways.”

“Norman Borlaug said, ‘World peace will not be built on empty stomachs,’” noted Coffman. “Each of these individuals devoted their careers to achieving food security through improving wheat — one of the world’s most important staple crops. From greenhouse to lab to field to the publication of academic papers, to seeds distributed to needy smallholder farmers, to their willingness to collaborate and learn and teach, we hold the four of them as examples we would like to emulate.”

The four received “the Norman,” a statue replica of Norman E. Borlaug, the noted wheat pathologist and breeder who won the Nobel Peace Prize in 1970 for his seminal role in the Green Revolution and who is highly revered among the BGRI community. The actual statue stands outside CIMMYT’s Campo Experimental Norman E. Borlaug (CENEB), in Ciudad Obregón, Mexico.

Other prominent scientists recognized with the award over the years include Robert McIntosh, former director of rust research with the Plant Breeding Institute in Australia; Mahmoud Sohl, former director general of ICARDA; and Kathy Kahn, the BGRI’s first program officer with the Bill & Melinda Gates Foundation.

Hans-Joachim Braun has led CIMMYT’s Global Wheat Program and the CGIAR Research Program on Wheat since 2004. Responsible for technical direction and implementation of the GWP, he led and managed a team of 40 internationally recruited scientists to develop wheat germplasm, distribute it to around 200 cooperators in wheat producing countries, and are responsible for the derived varieties being grown on more than 50 percent of the spring wheat area in developing countries.

“In his 35 years with CIMMYT, Hans has become familiar with all major wheat-based cropping systems in the developing and developed world,” said Coffman, who called Hans an important collaborator and close personal friend.

Braun was at the inceptual “Sounding Alarm” meeting in Nairobi in 2005 with Dr. Norman Borlaug and has been an integral partner in the development and implementation of the Durable Rust Research in Wheat (DRRW) and Delivering Genetic Gain in Wheat (DGGW) projects.

“Hans was integral to the BGRI’s efforts in preventing Ug99 and related races of rust from taking out much of the 80% of the world’s wheat that was susceptible when Ug99 was first identified in 1999,” said Coffman.

Bedada Girma Buta, technical coordinator for the DRRW and DGGW in Ethiopia, has served the BGRI since 2005 from the EIAR Research Center in Kulumsa.

“When Ethiopian farmers – both men and women – are looking for advice on improved wheat varieties and management of diseases, they call Dr. Bedada,” said Coffman, noting that Buta has made significant contributions to food security in his homeland since completing his undergraduate education at the Alamaya College of Agriculture, and his MSc and PhD degrees in the U.S., returning home after each degree.

Especially in the early phases of the DRRW project, Buta distributed improved seed or rust-resistant wheat seed farmer by farmer, field by field, village by village. Many in the BGRI have accompanied him on these field visits, scouting wheat fields for wheat rust along the way.

Buta is much sought-after for advice at the hundreds of farmer field days he has attended over his career. He has helped resource-poor wheat farmers access seed of durable rust-resistant varieties of wheat, produce their own quality seed, and improve their livelihoods through increased productivity.

“Dr. Bedada has the ability to collaborate with researchers globally as well as farmers on the ground,” noted Coffman. “He has played a big role in fighting wheat disease pandemics in Ethiopia.”

Getaneh Woldeab has been the BGRI’s key collaborator at the EIAR’s Ambo Plant Protection Research Center, where he directed race analysis activities and managed a keen scientific team.

“I speak for many when I say how amazing it was to see Dr. Getaneh’s impact on the next generation of Ethiopian rust pathologists,” said Coffman. “Young scientists were always surrounding him and learning good science from a man they clearly respected and admired.

Dr. Getaneh deserves so many credits for the significant transformation of the race typing facilities and research conducted at the Ambo Plant Protection Center in the last decade.”

With funds from the DRRW and DGGW, Getaneh and the EIAR team built a new greenhouse facility and lab for testing rust samples and preserving them in a secure cold environment. The greenhouse has four compartments for seedling growth and wheat stem rust race analysis.

His authorship of the “Protocols for Race Analysis of Wheat Stem Rust (Puccinia graminis f. sp. tritici),” with co-authors Endale Hailu and Netsanet Bacha, and funds from DRRW and DGGW, is an essential guide for race analysis, especially for scarcer-resource institutions.

Ruth Wanyera grew up in a farming family in rural Kenya, weeding, harvesting, fetching water, and making sure that everybody was fed. Educated in Russia, she retires this year from her position as senior research officer and head of the plant pathology section of the Kenya Agriculture and Livestock Research Organization (KALRO), where she has served as national wheat research program coordinator since the inception of the BGRI.

“Dr. Ruth Wanyera has spent more than 30 years working in plant protection in Kenya, where her main motivation as a pathologist is people — not plants,” said Coffman. “Ruth does everything she can to make sure there’s food on farmers’ tables.”

Wanyera was present in Njoro, Kenya, when Norman Borlaug came to take notes on the stem rust differential lines and was one of the very first scientists to recognize stem rust in East Africa. She remembers Borlaug saying, “All is not lost. We can get something. We can recover something.”

Wanyera was also present at the subsequent meeting in Nairobi, in 2005, when Borlaug, Braun, Bob McIntosh, Miriam Kenyua, Ravi Singh, Coffman and others “sounded the alarm” and laid out a strategy and a plan to arm the world’s smallholder farmers with rust resistant varieties of wheat. 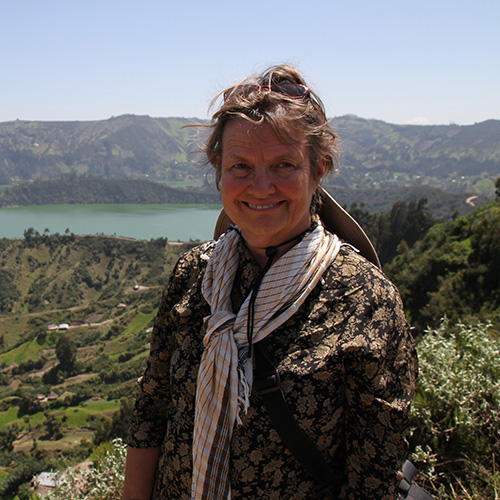 Linda McCandless is a writer and editor who specializes in international agriculture and development, persuasive story-telling and strategic communications. She is a strong advocate for science communication training, and science-based journalism with a focus on diversity and empowering lesser-heard voices.